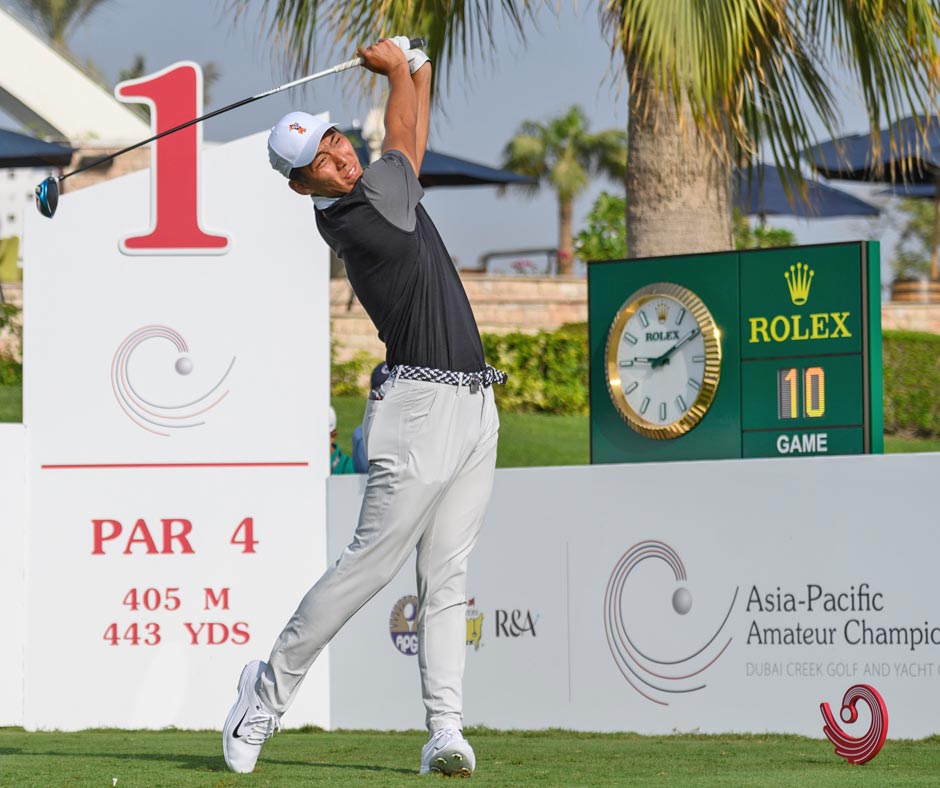 China’s Bo Jin fired a bogey-free, seven-under-par 64 to grab a one-stroke lead after the second round of the 12th Asia-Pacific Amateur Championship (AAC) on Thursday at Dubai Creek Golf & Yacht Club.

Defending champion Yuxin Lin of China made a double bogey on the par-4 closing hole and dropped down to four-under-par 138, four strokes off the lead.

Exactly 50 players from 15 different countries made the cut at two over par.

Jin is the younger brother of Cheng, winner of the 2015 AAC at Clearwater Bay Golf and Country Club in Hong Kong. A sophomore at Oklahoma State University, Bo also happens to be a very good friend of Rayhan Thomas, the 2018 AAC runner-up who holds the course record at Dubai Creek. At the Mena Tour’s Dubai Creek Open in 2017, Thomas fired a 61 that included a record-breaking run of nine consecutive birdies in a professional tournament.

“I have learned a lot from Cheng but when we get to the golf course, I definitely want to beat him. When he won the championship, I was so excited because it meant that I could go to the Masters at Augusta National Golf Club along with him. Obviously, he hasn’t told me much about this golf course but I get plenty of good insight into life and golf from him and yes, I want to win the championship like he did,” said Jin, who made five birdies on the back nine.

“Rayhan is a great guy and a very good friend of mine. We sat down before coming here, and he gave me a lot of good advice, like how grainy the greens become and how to putt on them. And how the course is rather short and why I should practice my wedges more than my long irons, and things like that. It definitely played a role in my round today.”

On his round of 64, Jin added: “I just played really well. Putting wasn’t the best but I hit it pretty well and pretty close to the hole and grabbed one or two on the front nine. Then on the back nine everything started rolling in, which was pretty awesome.

“The biggest change from the first round was the double bogey I made on the ninth hole yesterday. It was mental mistakes really. And I am happy that I did not repeat them today.”

Australia’s McKinney chipped in for birdie on the ninth hole and then holed his third shot from 103 yards for an eagle on the par-5 13th hole. He made four other birdies and a bogey in his six-under 65.

“Yes, I am just where I wanted to be after 36 holes. I got off to a pretty good start. I holed a couple of good putts. I played pretty solid and didn’t put myself in any bad positions. If I did, I recovered pretty well,” said the 19-year-old, who was born in Kirkcaldy, Scotland, but moved to Perth, Australia, six years ago.

Choi, No. 14 in the WAGR, came into the championship on the back of two wins and three second place finishes in his last seven starts in the U.S. He maintained his form in Dubai. After a bogey on first, he settled down quickly and was solid thereafter as he made four birdies for a 68.

Choi was happy with his round but said it did not measure up to the performance from his playing partners – Thailand’s Puwit Anupansuebsai (64) and McKinney (65).

“I love seeing the leaderboards, and I see a lot of guys going five under, six under. It was kind of annoying but at the same time, I know I can do better.”

UAE’s Ahmad Skaik, the top-ranked player in the country, closed with an even-par 71 on a day when he said he struggled with his game, but became only the second player from his country to make the cut in the region’s premier championship. Ahmed Al Musharrekh was the first to do so in 2011.

“It was a struggle out there. I didn’t hit it well. I struggled off the tee and with my irons, but my putting was on and my wedges, that helped me,” said Skaik.

After a single bogey and three birdies through 15 holes, Skaik had two late bogeys on the 16th and 18th but was satisfied with where he finished.

“I didn’t really pay attention to the leaderboard. I was just trying to focus on my own game. Just stay patient and wait for it. The front nine I didn’t hit it well, and I finished level par and then managed to make two birdies on 10 and 14. But I’m happy. Level par is fine.”

Created in 2009, the AAC was established to further develop amateur golf in the Asia-Pacific region. The champion receives an invitation to compete in the Masters Tournament and an exemption for The Open, while the runner(s)-up gain a place in Final Qualifying for The Open.

The 2021 championship marks the first edition held in the UAE, one of the APGC’s 42 member countries, and joins the numerous professional and amateur events Dubai hosts annually, including the European Tour’s Dubai Desert Classic and DP World Tour Championship.