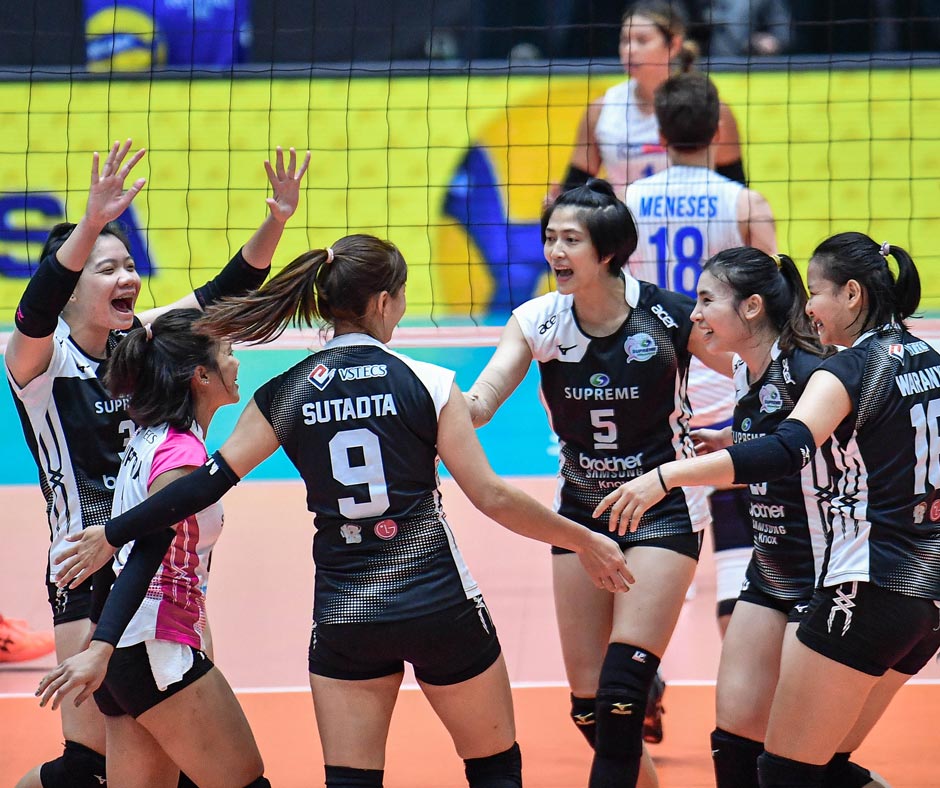 Nakhon Ratchasima, Thailand, October 4, 2021 – Supreme Chonburi, silver medalists at the previous edition in 2019 in Tianjin, China, proved a cut above Choco Mucho to beat the Philippine side in convincing straight sets in their quarterfinal match at the 2021 Asian Women’s Club Volleyball Championship at Terminal 21 Hall here on Monday.

Following the scintillating 25-13, 25-22, 25-21 win on Monday, Supreme advanced to the semifinals, where they will face off against Nakhon Ratchasima QminC VC in the all-Thais affair.

Supreme aimed high to gain the pride lost on the previous day when they went down in straight sets to Kazakhstan’s Altay and the former consecutive two-time Asian Club winners entered the court with their heads high in confidence for the possible win.

Against Choco Mucho, Supreme made the most of huge attacks from veteran Malika Kanthong in combination with solid blocks from Pleumjit Thinkaow to comfortably clinch the opening set 25-13.

Going down 0-1, Choco Mucho hit back bravely to gain the upper hand initially in the second set. However, Supreme regrouped and pulled their game together after that to stage a fightback against the determined Philippine side. Their intention paid off its dividends. Malika Kanthong and Pleumjit uncorked powerful attacks to help Supreme surge ahead Choco Mucho to win the closely-contested set 25-22.

Both teams poured everything to win the third set. Despite a strong challenge from Choco Mucho, Supreme Chonburi remained in aggressive form. The Thai team upped their tempo and continued attacking streak to win the set 25-21, match and a semifinal berth.

Malika Kanthong chipped in with 16 points for Supreme Chonburi, while Tyler Marie Kalei Mau emerged as the top scorer of Choco Mucho after bagging 16 points.

“I was so glad that I can help the team win this crucial match today. Choco Mucho are a well-trained team and did their good job, which put us in trouble. Our team were in full confidence to win this match to pave the way through to the semifinals. In our next match, we play Nakhon Ratchasima. We know their game plan, but I don’t think we can underestimate them because they have a wide variety of game plans to use in their match against us,” Malika Kanthong stated after the match.

“We came with full confidence and one goal in mind, that is to advance to the semifinals. Even though Pleumjit was in her 70% of performance today, it helped boost the team’s spirit while in the game. After four matches, only one team from Thailand will make it to the final and I do hope it can be our team. I would like Thai fans to give big support for both Thai teams no matter which will be in the final,” Supreme Chonburi head coach Nataphon Srisamutnak commented.