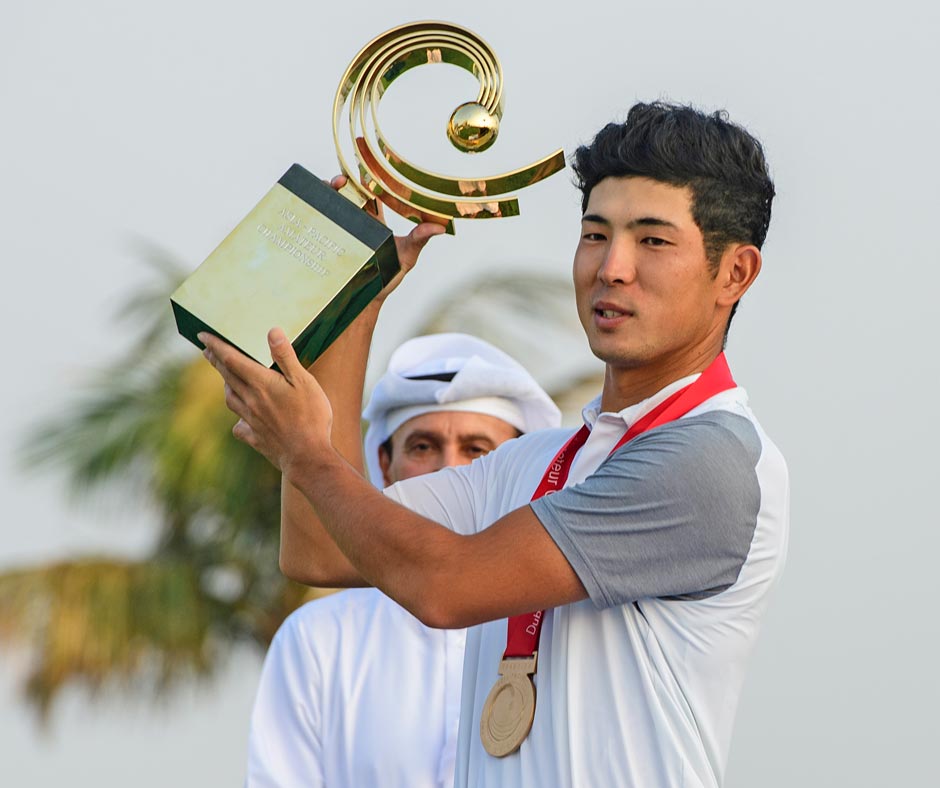 Japan’s Keita Nakajima made a critical par save after taking a penalty drop on the closing hole to take a one-stroke lead after the third round of the 12th Asia-Pacific Amateur Championship (AAC) on Friday at Dubai Creek Golf & Yacht Club.

The No. 1 player in the World Amateur Golf Ranking ® (WAGR ®) shot a four-under-par 67 to finish 11 under, one ahead of a fast-charging defending champion Yuxin Lin. The Chinese star, who finished the

second round T-15 and four strokes off the lead, roared back in contention with a stunning six-under-par 65 that included seven birdies and a solitary bogey.

Overnight leader Bo Jin (70) of China, brother of 2015 AAC champion Cheng Jin, seemed to be cruising towards another bogey-free round after 16 holes. He was 11 under par total after three birdies and tied for

the lead with Nakajima but bogeyed the 17th and 18th holes to drop down to nine under par and tied for third place with Korea’s Sam Choi (69).

Hong Kong’s Taichi Kho shot the best round of the day – a seven-under-par 64 – and his reward was a significant jump up the leaderboard to solo fifth place at eight under par. A big group of seven players

finished T-6 place at seven under par, four behind the leader.

The only mistake Nakajima made all day before his pulling his tee shot into the penalty area on the 18th was a three-putt bogey on the eighth hole.

“I am really proud of the par save on the 18th and a big birdie on the 16th [he made a 15-foot putt]. The last three holes are very challenging on this course, so to finish them in one under was good,” said the 21-

year-old Nakajima, who is hoping to become the third Japanese winner of the AAC after 2021 Masters champion Hideki Matsuyama (2010, 2011) and his good friend Takumi Kanaya (2018).

“I was a bit nervous at the start, but made birdies on the third and fourth holes, and that gave me nice momentum. I did miss a couple of short putts, but then I also made the big putts on the 16th and 18th.

“One shot ahead, I am really excited to be in the position I am in. I just want to have a good preparation tomorrow morning. Because of the way I finished, I am feeling very confident.”

Frustrated after finishing with a double bogey on the final hole in Thursday’s second round, Lin was off to a brilliant start as he opened with three birdies in the first three holes. A second bogey in two days on the

par-4 seventh could have stalled his momentum, but he added another four birdies to secure his lowest round this week.

“Obviously, my ballstriking was just a little off yesterday, so I worked extra after the round, and it paid off. I just felt like I stroked it better today and the putter was all right. It was a good score,” said the 2017 and

“I’m really glad I have this opportunity to be in contention again. It would be nice to achieve the threepeat. I’ve gotten myself in this position, and I’m going to enjoy tomorrow and see what happens.”

Though he finished two behind Nakajima after back-to-back bogeys, Jin, the 19-year-old from Beijing, didn’t seem discouraged.

“Definitely not the finish I wanted for the last two holes. Overall, it was still a solid round, and I am excited for tomorrow. In fact, if you ask me, I prefer to come from behind rather than lead, so this is fine,” said Jin.

“The bogey on the last two holes was not that bad, either. The 18th is a tough hole, and on 17th I left myself in a tough spot on the right of the green.”

Created in 2009, the AAC was established to further develop amateur golf in the Asia-Pacific region. The champion receives an invitation to compete in the Masters Tournament and an exemption for The Open,

while the runner(s)-up gain a place in Final Qualifying for The Open.

The 2021 championship marks the first edition held in the UAE, one of the APGC’s 42 member countries, and joins the numerous professional and amateur events Dubai hosts annually, including the European